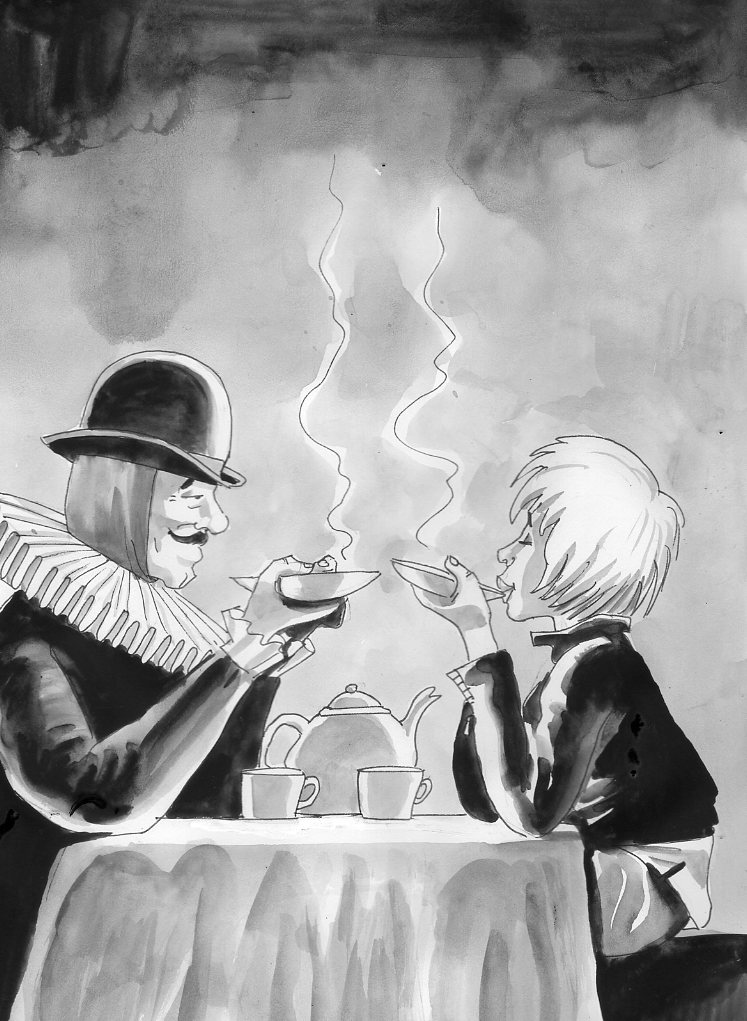 Uprooted from the comfort and safety of Saint Feasance’s Home For Lost Little ‘Uns, Charlotte finds herself sent to an unknown address where she meets a strange man and is… recognised.

“Yes,” answered Charlotte. “It’s me. But that depends on who the you to whom you refer might be…”

“Your name!” the ancient demanded as he leaned against an Elizabethan telephone table for support.

“Charlotte Corday,” was the simple reply. What else could she say? She was indeed herself, unless this mister Dee had someone else in mind. Luckily- perhaps! – it turned out that he hadn’t.

Mister Dee looked at her. She ultimately found this quite rude and challenged him with a sharp “Get yer eyes back in your head, granddad, or I’ll give you a punch up the bracket.”

“It is you!” The crumbling old ruin of a man – mid-thirties, at least – clasped his hands together with a loud slap. “Can I offer you the hospitality of my lodgings?”
“Well, a cup of tea wouldn’t go amiss.”

Some minutes later Charlotte was settled at the table in a kitchen with a very high ceiling as her host poured two cups of tea. “Milk?” he inquired.

“Just a drop”, said Charlotte, thinking that the kitchen reminded her of the old chapel at Saint Feasance’s Home For Lost Little ‘Uns”. Something like a bat fluttered overhead and settled in a nook up near the top.

Charlotte noticed that this John Dee was still looking at her very intently. She gave him a get-out-of-it look.

“My apologies. It’s been a while since you visited. I had almost forgotten -“
“Stop right there, mister.” She put down her tea. “I’ve never been here before. I mean, I’d know if I had been, wouldn’t I?”
“Not necessarily,” was the response. “More tea?”
“Yes, please.”

He poured and saw to the milk and sugar. He saw that she was brimming with questions, but wary of asking them. He smiled. That was just like her! “Mister Dee?” Her voice called him back from a quick but deep remembrance of all the times they had met before.

“Doctor Dee”, he corrected her. “Chief astro-finagler to Her Majesty Queen Elizabeth.”
“You’re a bit daft, aren’t you?” She didn’t mean it unkindly. “You mean to tell me you’ve been to Buckingham Palace?”
“I was referring”, he said, “to Queen Elizabeth the First.”
“Look, mate. Can we agree on one thing? It’s nineteen sixty-eight, right?”

He admitted that, yes, most days it was, indeed, nineteen sixty-eight. At which point Charlotte tapped a finger on the table and drew his attention to the fact that Queen Elizabeth First was… oh, years ago.

He could not disagree with this. The last couple of hundred years, he admitted, had been a bit of a downhill slide for him.
“Look!” Charlotte was determined that good plain sense should win this one. “You can’t be hundreds of years old! What year were you born?”

“Nineteen twenty-eight.”
“See? That’s only forty years ago!” The case seemed concluded. Charlotte drained the last of her tea and sat back in her chair.
“Forgive me”, came the resigned response. “I’m forgetting that you’re not the same Charlotte with whom I formerly adventured.”

It was around then that Charlotte decided he was, indubitably, mad. He spun her some yarn about adventuring with “Charlotte Corday” in the fifties. Then he had fallen – or been pushed – into a time-shaft and wound up in the sixteenth century! Only the noise from upstairs stopped the stream of rubbish from his lips. Eventually, he heard the noise too.

“I forgot,” he said, “that I was in mid-battle when you called. Can you excuse me for a moment?”

He didn’t wait for a reply before leaving the kitchen with an umbrella in his hand. He wondered who had sent her, was she really herself or was she somebody else looking for trouble?

Charlotte, for her part, conceded that it certainly did sound like a battle was in progress upstairs. And perhaps the old fool needed help. So she stepped out into the hall and set about joining him. There were, however, several staircases. It was only when a figure burning with incandescent green flames tumbled down one particular flight of stairs, landed at her feet and then vanished that she knew which way to go. Something sounded like lightning up there too.
The stairs creaked under Charlotte’s steps. Despite the sounds of terrible combat, she took moments to regard the many old paintings lining the walls. And there she found- or thought she did- the answer to the puzzle of the day. The figure in one of the pictures did resemble her. But older. And wearing some sort of a naval uniform. But with… a spaceship in the background?

Putting aside the matter of the spaceship for a moment, Charlotte concluded that she must resemble some old acquaintance of Doctor Dee’s and, being mad and everything, he thought she’d come back to him.

Fine, but that still left the fight on the next landing to be dealt with. Charlotte was quite unprepared for the sight of men with what looked like worms dangling from their eye-sockets shooting what could only be described as magic spells at Doctor Dee. Luckily, the old nut gave as good as he got, and something seemed to wobble within the resolve of the attackers when they saw Charlotte. Just then, Doctor Dee fired a big lump of purple lightning and disappeared most of them.

The rest were carried away into a flickering gap in the air by men wearing overcoats and complicated pilots’ helmets. It seemed that the battle was over.
“For now”, stressed Doctor Dee, tilting his bowler hat to an angle and closing his umbrella. The house was quiet again, with just the smell of burnt magic to hint at what had occurred. “Can I offer you a drink?”

“I’m only sixteen,” stated Charlotte. He had one anyway, sitting on one of many sofas in what seemed to be the sitting room, with his feet up on an Assyrian coffee table, revealing skinny white legs under his robes.

Charlotte contented herself with a glass of pop. He watched her as she studied his many souvenirs and mementoes: a Martian sword on the wall above the Lemurian sideboard; a framed poster issued by the “British Resistance”, swearing to liberate the country from Nazi rule; a toy rocket-plane…

He corrected her. It wasn’t a toy. It was a model. Charlotte Corday flew the original prototype, sometime back in one of the forties decades.

This was all getting very confusing. Charlotte sat down on another sofa and considered the fact that she knew very well that Britain had never been conquered by the Nazis. Nor had such things as rocket planes ever blasted off into space. “And what’s that?” she asked, pointing to an object housed in a glass case on a Venusian card table.

“That”, said Doctor Dee, “is a Royal Space Navy blaster. Charlotte – another Charlotte- wielded that about seventy years ago. All through the Iron Moon business and the First Worlds War, in fact. Well, I’m off to bed.”

So he stood up and tottered out of the room, pausing only to let Charlotte know that a bedroom had been prepared for her on the next floor. He, or so he said, slept in the attic. Or the ninety-ninth floor, as he called it. Which was just completely mad, really.

Charlotte sat on the sofa for a while, enjoying the quiet without knowing what time of the day or night it was. She noticed a Sumerian television set, and switched it on. She flicked among the various channels. She saw Napoleon’s army invading England by means of a Channel tunnel. She saw a strange donkey puppet who actually seemed able to see her too and shouted all sorts of things at her. In French, she thought.

Then she saw herself. There she was – or a version of her – flying into space. There she was, punting across a future flooded London with three children, possibly hers. There she was, walking the Martian deserts, the Venusian jungles and the Lambeth asteroid belt.

There she was. Whoever she was.