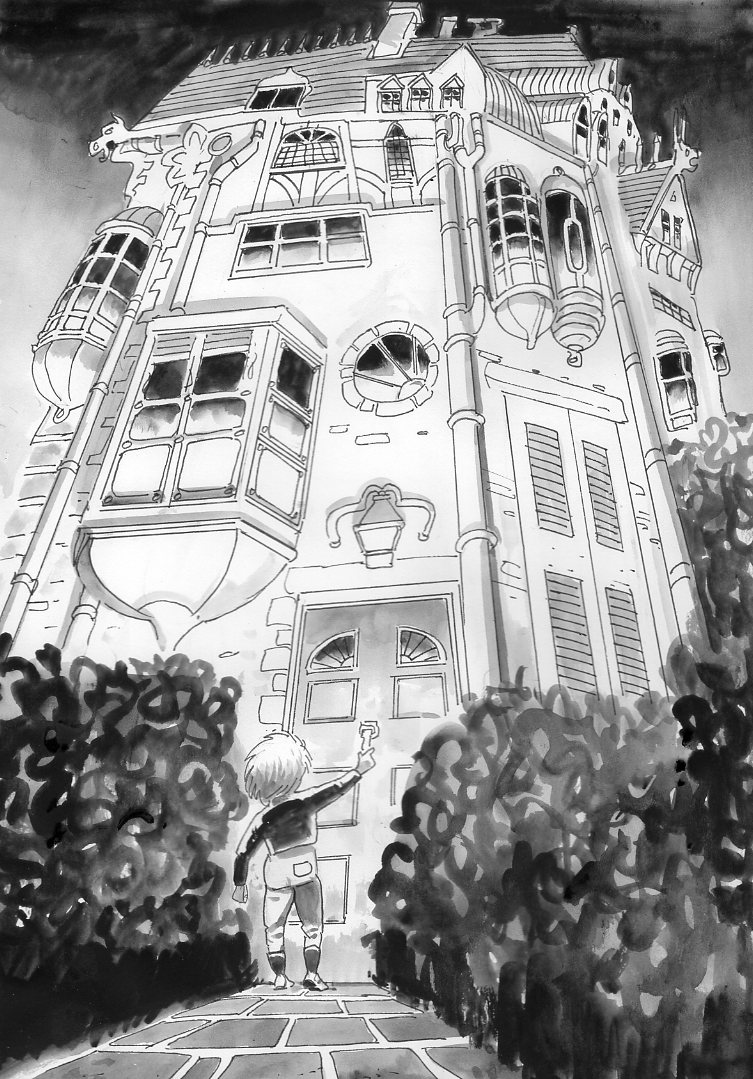 The Orphan Charlotte Corday bounces out of bed on her sixteenth birthday to find the orphanage completely deserted and a shoeless legal functionary bringing news of a hitherto unknown relative.

“Well, more of a friend of the family than an actual relative. But he has agreed to act as your guardian until-“

Charlotte interrupted him. “What family?” She simply had to know. But the man had no information on that score. He professed that it was beyond his brief, but offered that the best way for Charlotte to find out was to sign the documents and get underway for- he checked the papers- “Number 83 Fire Ant Lane.” He also coughed up sixpence for her bus fare.

Which wasn’t enough, of course. And now she found herself on an unknown street in an unknown corner of London. She watched as the bus drove away, then zipped up her jacket all the way and turned to see what was what.

A couple of pubs. A greengrocer. A TV rental shop. All useless to a penniless Charlotte, of course. But she could ask directions, she supposed.
Of the two pubs, the Noisy Oyster was closest, so she warily pushed open the door and ventured into the saloon bar. There was lots of polished wood and nice brass fittings, but not a single customer.

Charlotte looked at the framed pictures and photographs around the walls. One, in particular, caught her eye. The photo had obviously been cleverly faked. It depicted a very cheerful octopus playing a piano and, from the look of it, singing. He was also wearing a cap with shiny buttons all over it. Charlotte looked at the piano in the corner of the empty pub. It was the same piano. “Can I help you?” said a voice.

Wherever he had sprung from, there was now a man standing behind the counter, polishing a glass with a towel. His eyes shone. To be fair, he looked a bit mad. He identified himself. “Archie Blood,” he said. “And you are..?”

Charlotte gave her name and this Archie Blood fellow put down his glass. “In that case,” he said, “you’d better have a pint.”

When she pointed out to him that she was only sixteen, Mister Blood looked at her for a moment, winked, and then offered her a small bottle of red lemonade, which tasted quite nice. Then she remembered to make it clear that she had no money. This, apparently, was not a problem. She took another sip of red lemonade and reached for the scrap of paper in the other back pocket of her skinny jeans.

As well as the address – 83 Fire Ant Lane – there was a name on that paper. John Dee. Mister Blood laughed when he heard it and helped himself to a little glass of something from under the bar. His eyes grew, if possible, brighter.

“Old Johnny – or Mister Dee, if you want to call him that – lives just around the corner.”
“But the bus conductor told me I was still quite a distance from Fire Ant Lane,” said Charlotte, enjoying another drop of red lemonade.
“Depends how you look at it,” replied Mister Blood. “Go out that door,” he said, pointing to a different door to the one by which Charlotte had come in, “turn right and keep going until you come to Oil Drum Lane. Then turn left and you’ll find Fire Ant Lane handily enough. And tell Johnny I said hello.”

Charlotte was almost surprised when the directions turned out to be correct and accurate, and soon she was standing by the garden gate of a very odd house indeed. The handle of the gate was stiff and rusty, and the hinges squealed loudly as she pushed it open, straining against the wild overgrowth of the garden which seemed to be trying to push the gate shut again. However, she got in. But now crazed hedges and bushes and overgrown shrubs pushed in on the path from either side, as if trying to conceal the way to the front door.

Again, Charlotte prevailed, and soon found herself looking at a big wooden front door with a small window set into it, the whole business set into an ornately tiled porch at the top of three big steps. Around this, the house shot off in all directions, in all sorts of styles.
It had turrets, she noticed, and windows made of dark coloured glass. A surprising number of drainpipes too. Charlotte looked for a doorbell. How, she wondered, could she be related to someone who lived here?

Well, not a real relative, apparently. A friend of the family. Was that what the man with no shoes had said? She pushed the doorbell. It made a noise like an old brass band. But nothing happened.

So she pushed it again. It made a noise like a lifeboat splashing into the waters around the Titanic, and somewhere above her, one of the windows made a slow glassy cracking sound. Then Charlotte became aware of activity on the other side of the door. Somebody was trying to open it. The door appeared to be almost welded to its frame. It must have been ages since it had been opened. Charlotte supposed that the milkman must deliver to the back door.
But how would he get through that… that jungle? To say nothing of the postman. And if the door was never opened… then how did this John Dee get out of his house?

The letterbox suddenly screeched open and a racked voice coughed out a plaintive “Well, don’t just stand there- push!” from inside.
Charlotte put her shoulder to the door. After some time the door began to give inwards. But it was a good half hour until there was space enough for a startling head to look out around the frame and demand, “Well, what d’you want?”

The question met with a good shove from Charlotte. The door flew inwards before she even heard the words. She had just time to notice that the man was wearing a bowler hat before the door hit him and sent him sprawling. “Oops,” she said. “Sorry.”

The man seemed very old, at least thirty, as he clambered to his feet. The strange thing was that, apart from the bowler hat, he seemed to be wearing some sort of old-fashioned robe and shoes with buckles on them. He wasn’t pleased.

“I’ll have you know, young man-“ he began, but Charlotte had to stop him there. She granted that her short hair might have confused so old a codger but she was definitely a girl. So he raised a sort of monocle to his eye and took a look at her. After a moment, a look of shock set up shop on his face. His eyebrows went up and his monocle went down, dropped from a shaking hand. Luckily it was on a string around his neck so it just sort of swung around rather than smashing to the floor. It looked quite expensive.