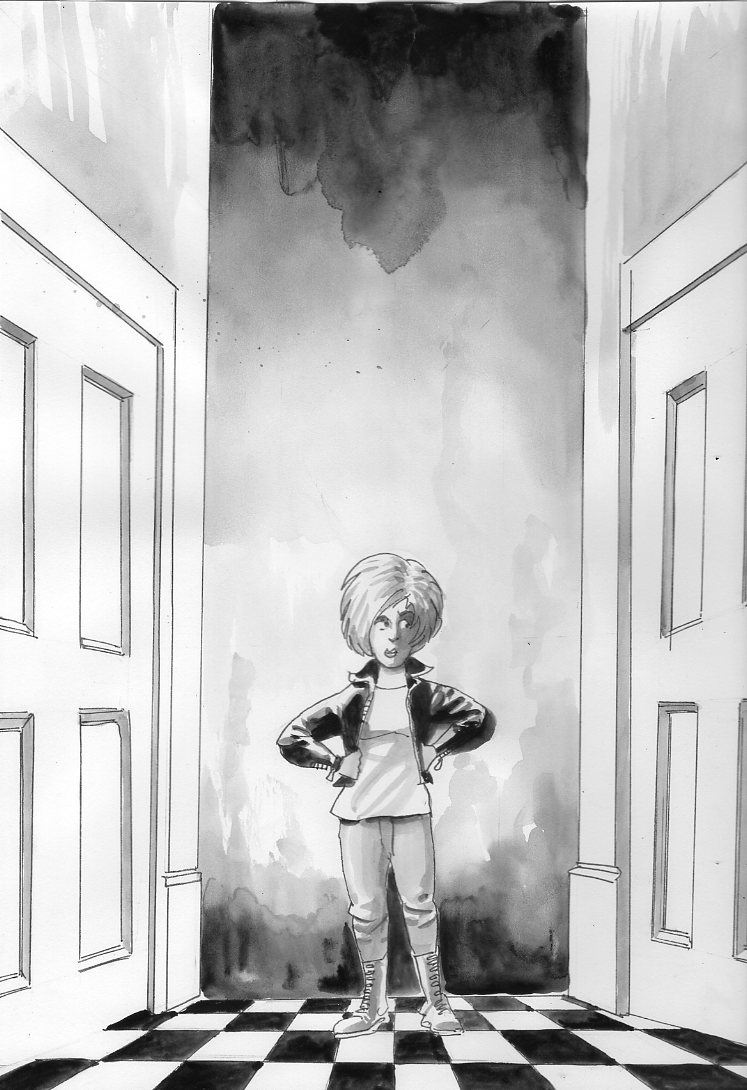 “Oi!” shouted the bus conductor. “This is as far as you go.” Charlotte pretended not to hear him, but now everyone on the bus was looking at her as the red-faced man with the look of a sergeant-major about him bore down on her.

She looked out the window, but all she could see was his reflection. “Sixpenny fare takes you this far and no further.”

And it had been her birthday. She was sixteen. Being sixteen is an excellent way to begin a day, she thought to herself as she rolled out of bed and into her best skinny jeans. Well, her only skinny jeans. A white t-shirt and her black leather jacket completed the ensemble. And yet…

…And yet no smell of breakfast sausages swam happily through the air to her awaiting nostrils. Nor was there any sound of kettles merrily whistling and lids clattering onto fresh pots of tea.

Charlotte combed her hair and stuck the comb in the back pocket of her jeans, zipped up her jacket two-thirds of the way and stuck her nose out the door of her little room.

The corridor was empty. That, in itself, was unusual. Saint Feasance’s Home For Lost Little ‘Uns was usually buzzing with the clatter of morning activity by this time.

And what time was it? The clock above the door to the refectory said quarter to eight. But when Charlotte looked at it again a few minutes later it still proclaimed that time. The clock in the kitchen had stopped too. And stranger still, the big frying pan was hanging on its hook and the kettle, when she lifted it, was empty. And where was the kitchen staff?

A quick sniff around revealed that not only was the kitchen empty, but it appeared that the entire premises had become suddenly uninhabited by all save one person. Charlotte Corday.

She checked herself in the long mirror in the hall. Yes, at least she was still there. But then she saw a movement behind her inside the reflection and spun to see a person she had never seen before. He was thin and carried a briefcase, wore an old-fashioned suit and, Charlotte suddenly realised, no shoes!

“Charlotte Corday?” he piped, popping open the clasp on his case and looking a bit surprised to find a small sheaf of documents inside.
“Yes?” answered Charlotte dubiously, looking at the man’s feet. For some reason she counted his toes. She looked up at the sound of a ball-point pen clicking in the man’s hand and saw that the documents were now laid out on the hall table.
“Sign in the spaces indicated, and I’ll want the pen back,” he said, and something seemed to be swimming inside his eyes. “We’ll have you on your way in a jiffy.”

Now, Charlotte wasn’t about to let on that she was even the slightest bit mystified or otherwise puzzled by all this, but she felt she had to ask one or two questions. “Where is everybody?” was the first one. “And what happened to breakfast?” was the second.

The man regarded her silkily and she noticed that he was still offering her the pen. So she took it. To be polite. But she didn’t sign anything. Not yet.
“The Home is being wound down,” he finally explained, matter-of-factly. “All residents have been discharged or otherwise processed and the premises will be recalibrated presently.”

What sort of talk was that? Charlotte was about to shout something when the man headed her off with a line that silenced her good and proper. He said, “We’ll soon have you on the way to your relative.”

Talk about a spanner in the works! As far as Charlotte knew, she was an orphan. Always had been. The only life she’d ever known was within the walls and grounds of Saint Feasance’s Home For Lost Little ‘Uns. All her pals were here.

Or had been. Until now. Until the whole place had suddenly become deserted and this bloke with- were they little fish inside his eyes?- turned up with news of- of a…relative?