Recently launched, a new episode of the latest Charlotte Corday story from Dan Dare and Thunderbirds artist Keith Page is now online, his time-travelling, multiverse-hopping adventuress embroiled in a mystery in Victorian London.

In “The Wild, Wild… East End!“, available to read for free on the online comics hub Tapas, Charlotte leads an investigation into vicious murders in Victorian Whitechapel – aided by Wild Bill Hickok and Sitting Bull! 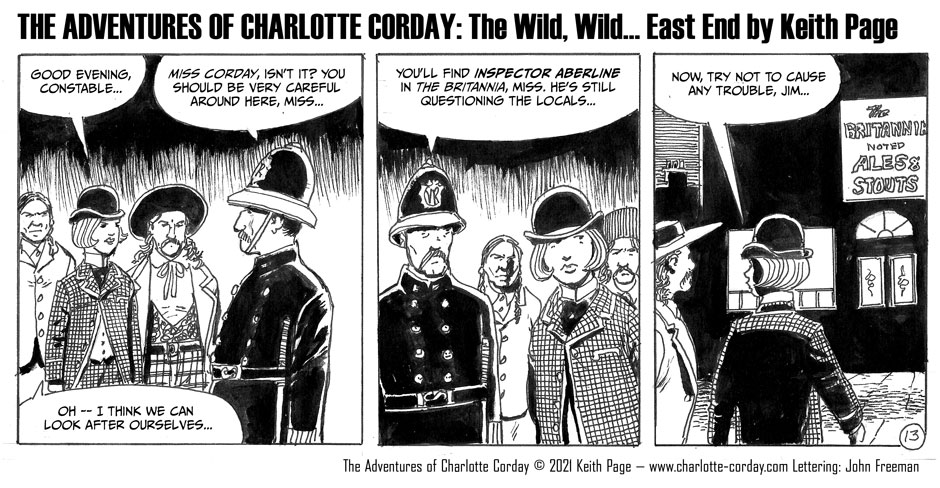 “The Wild, Wild… East End!” is the latest Charlotte Corday adventure both written and drawn by Keith, told in newspaper strip format, and several other stories, including his Thunderbirds homage, “Wonderbirds at Your Service” and an alien invasion story, “Shockwave Riders“, are also available to read on Tapas, all lettered by John Freeman.

Charlotte Corday’s many lives include a steampunk space explorer and a French detective of some sort getting involved in all sorts of arcane exploits in 1950′s London which could best be described as “Brighton Rock meets Quatermass and the Pit“.

Inspired by the great British comics artists of the past such as Frank Hampson, Don Lawrence and Joe Colquhoun, Keith Page has worked full-time in comics and illustration for almost 30 years. Subjects have ranged from television-related material such as Thunderbirds, science fiction, and war stories of all periods for Commando.

Along with many Charlotte Corday-related projects, recent works include The Casebook of Bryant May: The Soho Devil written by Christopher Fowler.

• You can read “The Adventures of Charlotte Corday: The Wild, Wild,… East End” for free on Tapas

• Why not explore more of the official Charlotte Corday web site? Find out more about the story, published stories and information about its creators | Like “Charlotte Corday” on Facebook