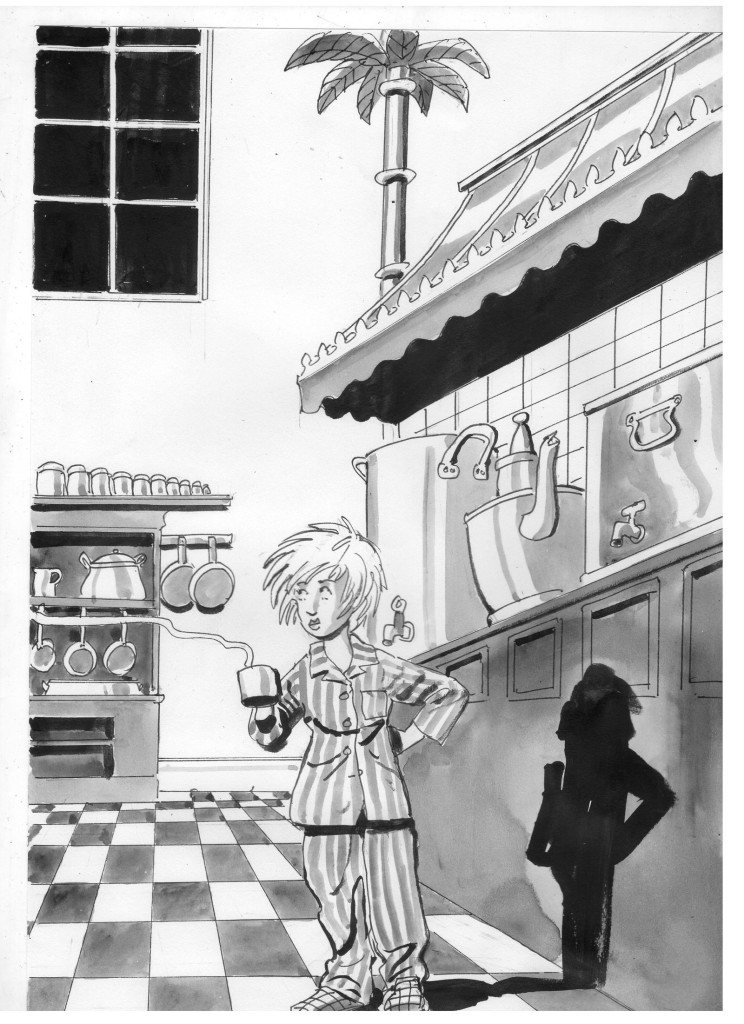 As the house on Fire Ant Lane settles down for the night, its new arrival finds herself anything but sleepy.

Finding herself unable to step into the (presumably) kindly offered pyjamas had been the start of it, thought Charlotte. The room was nice enough. The blue and white stripes on the eiderdown cover generated a sort of seaside feeling in her heart, which she had to admit was quite pleasant. But had she even been to the seaside? Had she ever even seen it evoked outside the pages of a book?

The little bookcase drew her eye. The madman who ran the house had pressed a copy of For Fear of Little Men upon her, but she had placed that on the bedside table unopened and now her attention fell upon the top shelf where she spied (between a Martin Siegel paperback and the autobiography of Jack Hawkins) the unmistakeable blue spine with yellow lettering of Augustus Dave’s “Rumblings”.

Now, Charlotte had been a good way into the very same book when the strange events at Saint Feasance’s had catapulted her out the door and landed her here. Reaching for the little volume her fingertips told her, a second before they connected with it, that this was not just another copy of the book but the very same one that she had previously possessed.

Which was impossible, of course. So she investigated. The cover was the same, but why shouldn’t it be? She’d always liked the illustration, which depicted a figure (the author) sitting with her back to us on the deck of a little barge, raising a glass to the lock-keeper (a badger) who had just opened the gate ahead in order that she may pass through.

Charlotte hadn’t reached that particular part of the book yet, and was most eager to discover how a story (claiming to be an autobiography, no less!) that began with an account of a disastrous mission to the planet Mars could somehow involve a pleasant waterborne trip along the English canals. She opened the cover and was about to look for her place among the pages when a bookmark brought her to the exact spot she needed to find.

This was strange. Not as strange as the magic battle she had witnessed earlier that evening (Or had she? Was she going off her rocker?) but certainly noteworthy. Further (and Charlotte was rather startled at how easily this next small fact slid into place in the top drawer on the left of the roll-top desk of her mind) a quick inspection revealed that it was (Why bother pretending otherwise?) the very same raffle ticket she had been using to keep her place in her various readings since it had brought her no luck at last year’s Saint Fantog’s Day fete.

Ten prizes were listed. None of them made any sense to her. Nevertheless, something told her that she should keep the ticket, so into her pocket it went.

So now: Back to the mystery. This was indeed the same book she had read under the bed covers with a torch. The name of a former owner, written in blue ink on the inside cover, was the clincher: Pompey Snurg. Was that a girl’s name or a boy’s name? Charlotte returned to the bed and sat down on it. The springs made a nice sound. She looked at the stripes on the eiderdown cover until she could smell sea air and hear the clacking of deck-chairs being set out. She suddenly fancied some fish and chips.

Stop that, she ordered herself. She reached for her mug of cocoa. But it had gone cold. For a moment, it had represented the possibility of a re-connection with…something or other. But now it was cold. But, practical as ever, Charlotte knew that what was cold could be heated up again. And that was what kitchens were for.

It was only when she stepped outside her little room that she realised she was slightly anxious about travelling downwards through this strange house. But, cup in hand, she steered herself to the top of the stairs and gathered herself. It was dark, but the moonlight (was it?) that flooded in through the many stained-glass windows cast enough illumination to be going on with, even if it gave the place a sort of underwater botanic gardens feel.

Charlotte looked down at her feet and was pleased (and only slightly apprehensive) to see that they had already begun carrying her step by step down the stairs. She chanced a glance or two at some of the many pictures that clogged the walls along the way. At some points in her journey, particularly on the various landings, the pictures had clearly been hung over other pictures, like one jigsaw puzzle glimpsed through another one. Or something. And in the meantime the cocoa was still cold. So down the stairs she continued.

It was a big house. Well, she knew that already. But now she was processing and filing the information. Did her host really live here alone? Did he have other guests? Charlotte stopped that thought in its tracks. She didn’t wish to think it. Not this side of a nice cup of cocoa anyway.

Many of the landings behaved as if they might be the ground floor, only to suddenly reveal another set of stairs plunging further downwards. Right, so. For a moment, Charlotte worried that she might have accidentally passed underground, but the moonlight through the stained-glass reassured her. She found the kitchen.

Big it was, and used for more than cooking by the look of things. She couldn’t find a light switch, but at least the moonlight had got in here too and allowed her to see what she was doing. The cocoa was quickly transferred into a little saucepan and set upon the very large stove. A matchbox was found with a single match in it. This was lit and its flame applied to the gas ring, and soon things were warming up nicely.

As Charlotte waited, she reflected that it was convenient that the moonlight penetrated the house from more than one side. And then she realised that this wasn’t a normal state of affairs at all. She crossed to the window. Pots and pans and cleavers and things were hanging on a rail before the glass, all silhouettes. Leaning forward, Charlotte chose one particular pieces of the irregularly-arranged stained-glass as the lens for her inspection of the outside. Yes, there was a moon out there. Several, in fact. Probably best to return her attention to the cocoa, she decided.

This turned out to be a good move. Safely back in its mug, the wonderful beverage was raised to her lips and sipped. She enjoyed it more than she had ever enjoyed a mug of cocoa before. It tasted of… galaxies.