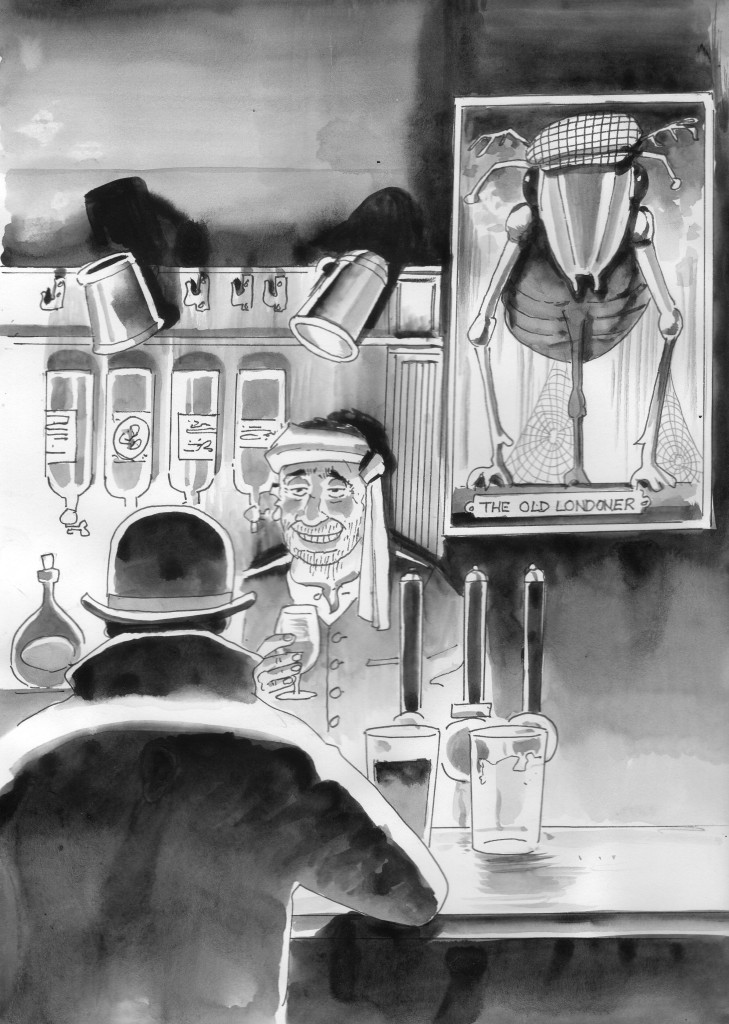 As the freshly re-orphaned Charlotte snoozes away her first night in the House of Dee, the barrel is rolled out in the Noisy Oyster. Now Read On!

The pub that never shuts was just closing when the door opened and a bowler-hatted eminence slid inside out of the cold. The gentleman self-identified to Charlotte as Doctor John Dee cast an eye around and found the Noisy Oyster as apparently empty as ever.

The echoes of past, present and future pub talk, the chinking of glasses and the odd bit of a song swam into the ears that kept the bowler from falling over the eyes of the magician. As ever, the wavelengths were co-existing and only occasionally overlapping. In other words, Doctor Dee stood alone in the saloon bar, but every soul to ever cross the door of the Noisy Oyster had left a trace, a noise, a smell. He might as well have been standing in Piccadilly Circus on VE Night, for in that small, twisted space of dark wood and marble countertops thronged millions.

It would be incorrect to call these presences ghosts, as many of them were still at large elsewhere in the city, huffing and puffing and scratching their arses, while just as many had yet to be born and had wafted in from one or more of the main futures.

The current licensee, Archie Blood (late of El Alamein and all points between) sent an habitual hairy eyeball over the bar to greet the incomer. He followed this with an unwashed wink as he reached for a pint tumbler with one hand and the ale-tap marked “Old Fuhrerbunker” with the other. “You read my mind,” allowed Dee.

Another wink. The extent of their cerebral inter-penetration was unclear even to themselves. Theirs was a long game of hints and guesses, swings and roundabouts, noughts and crosses. They had often been on the same side. They might be now.

Blood knew what was on Dee’s mind and his knowing had nothing to do with any head-trickery he may – or may not – have picked up in his travels. Hadn’t he seen Charlotte Corday earlier that day, on her way to Dee’s house at No.83 Fire Ant Lane? She had looked bemused and a little off. But then she always did. Meanwhile, the sorceror’s pint was ready.

He was always curious to see what class of coinage Dee might produce by way of payment. A couple of small copper triangles dropped from his hand onto the counter. Everybody in the empty pub looked around curiously. Blood scooped one of the coins up and took a look. There was a head on one side but it certainly wasn’t the present Elizabeth. Too many eyes, for one thing. And the crown was all skew-whiff.

So the game kicked off. “Where’d you happen across that bit of change?” asked Blood, knowing full well that the answer would contain anything but a straightforward response.

Dee gave the impression that he was thinking as he raised the beer to his lips and took a lovely sup. Finally he said, “London, I think.” Which was very well-played indeed. Didn’t narrow it down at all. He didn’t say which London. He just left it hanging there. He looked up at the stuffed Martian in the glass case above the spirit optics and smiled vaguely.

At last, Archie Blood could stand it no longer, broke every cherished principle by which he lived and spoke directly: “She’s here, isn’t she?”
For an answer he got the quiet thud of Dee’s empty glass on the counter. “Stick another one in there, old cock. There’s a gent.”

As the beer was pouring, Blood revealed that it had been him who had given Charlotte directions to the House of Dee, “Although she had the address, scribbled on a bit of paper. Have you figured out which one she is yet?”

The carnomancer accepted ale number two and said that it was early days yet. He was going to need all of his extraordinations to get to the bottom of this. But a feed of pints was a good start. The appearance of a Charlotte Corday in one’s life was always followed by a severe intrusion of the Great and Frightful Other.

“Fire,” he mused. “The flapping of vast wings beneath bruised and worried skies.” Archie realised that another pint was going to be needed, and soon.

“Great ships listing in tentacle-clogged seas,” he continued. The ale appeared to be drinking itself. “Frogs and terrapins of uncommon size marauding in Spitalfields and refusing to stand their round in the Ten Bells.”

“Cripes,” said the man called Blood, reflecting. But that wasn’t the worst of it.

The beer glass – empty – was tapped repeatedly on the counter as its former contents took a good tight hold on Doctor Dee. “What troubles and puzzles me,” he ruminated, “is that piece of paper with the address written on it.”

He indicated the ale tap with a jut of his head and revealed that when he had asked Charlotte if he might examine the paper she had been unable to find it. It wasn’t in any of her pockets. So he’d sent her off to bed with a mug of cocoa and the new John Blackburn novel, assuring her that it didn’t matter. Everything was alright.

For a moment, his insistence on all and sundry being tickety-boo had seemed to give her an inkling that the opposite might just be true. But she was tired and his repeated assurances prevailed. And the cocoa was nice.

“Are you thinking what I think you’re thinking?” asked Archie Blood, helping himself to a double from the whiskey optic.

“I don’t know,” said the arch-ellipsist, for a moment using all his power to ascertain when the next pint might make its appearance. “Certainly it bodes ill.”

The pint appeared. Doctor Dee looked into it deeply. Then he looked up and saw that the merest wisp of a smile was threatening to make an appearance on the face of his old adversary on the other side of the bar. And in a moment of intense, mutual cerebral inter-penetration both multifarious gentlemen realised that if Charlotte had been in possession of a bit of paper with No.83 Fire Ant Lane written on it, then somebody had given it to her.

So somebody had wanted her to find the House of Dee. Charlotte Corday, eternal catalyst of mayhem and chaos, had been aimed like a cheeky little missile at the man currently living under the name of John Dee, chief astro-finagler to Elizabeth (the first one) in this year of our lords and ladies nineteen sixty-whatever-it-was.

“The game,” observed Archie Blood,” is a foot.”